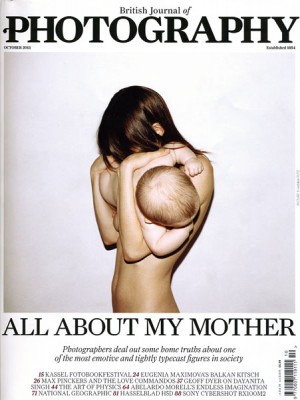 „… Several of the artists in the show pay homage to the kinds of composition and iconography we are familiar with from art history. Elinor Carucci’s series, Mother, features a beautiful Madonna lactans; Ana Casas Broda a reclining Venus; Elina Brotherus works with the tradition of the Annunciation; and Fred Hüning’s Einer, Zwei and Drei, make handsome use of the fashions, configurations and palette of 17th century Dutch portraiture. With Hüning, though, things are more complex than they outwardly seem. Even as these images are so exquisite as to invite touch, they document a tragic event – the stillbirth of the couple’s first child and the intervening struggle before his wife discovers she is pregnant again. The final chapter completes the cycle, where the second child is now four years old. It’s about “happiness, bonding, togetherness and love”, says Hüning. For Bright, the work “is a rare glimpse into a family’s life and their relationship with photography in order to capture things that are not usually made public”.